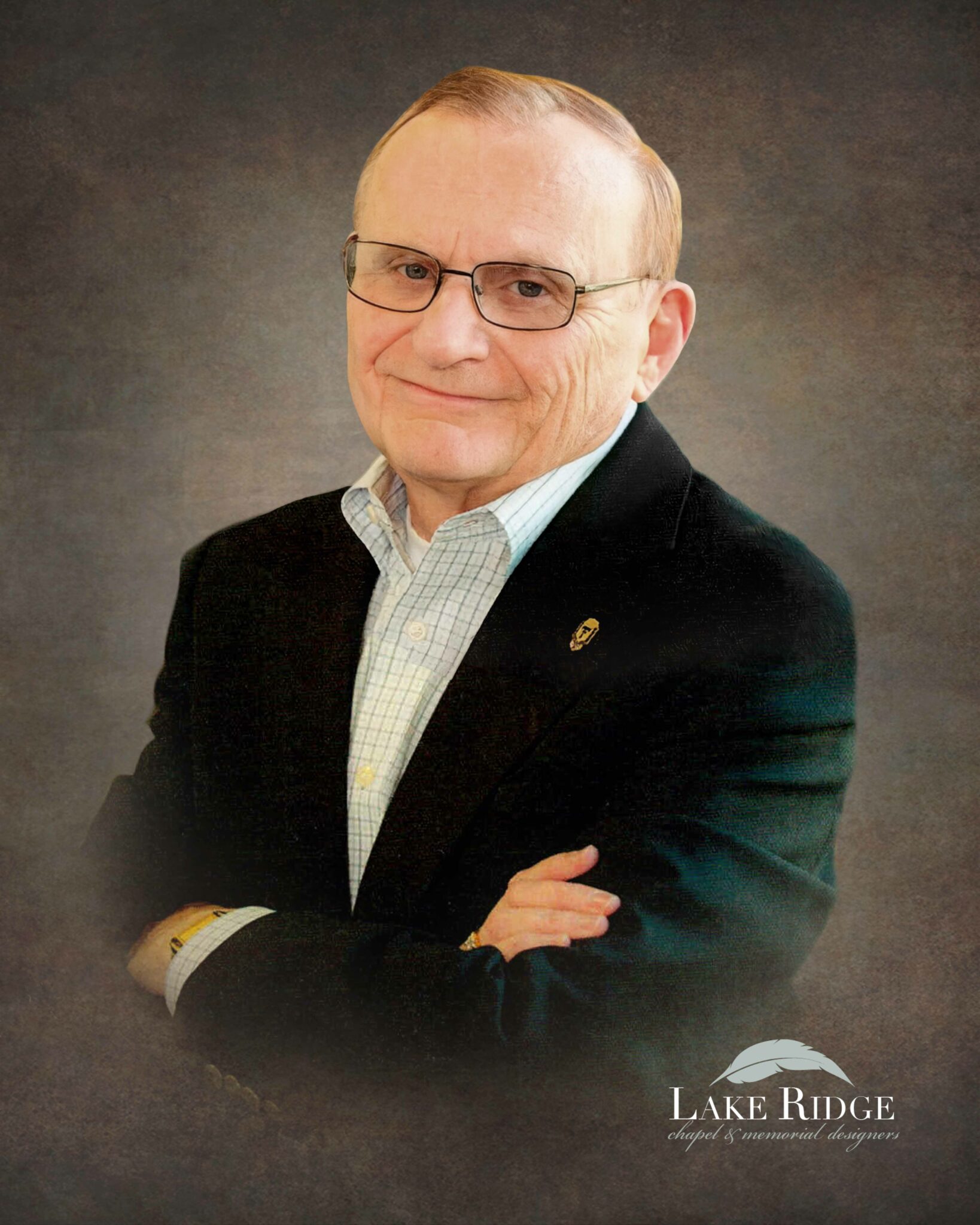 The family of Shelby Hunt will celebrate his life of 83 years from 4:00 PM to 8:00 PM on Wednesday, July 20, 2022, at the Chapel at Lake Ridge Chapel and Memorial Designers. He passed away on Tuesday, July 12, 2022.  We invite you to sign the virtual guestbook here on this page.

On July 5, 1939, Shelby was born to Donald and Marguerite Hunt in East Prairie, Missouri.  Shelby was the second of four sons and was born in a tiny farmhouse along the Mississippi River.  His family moved to Salem, NJ, in 1944 for his father to have better job prospects.  Throughout his working years in high school, Shelby put over half of his earnings into a savings account for college.  Tragedy struck his family twice when Shelby was in the eighth grade.  His father had suffered a broken neck leaving him partially disabled, and his mother was battling cancer.  This was when he “grew-up” and he often commented that he was “never young, but had no regrets”.  Shelby was a good student in high school but not exceptional.  Fortunately, his grades were high enough to receive a scholarship from Anchor Hocking Glass Corporation that was full tuition at Ohio University.

Shelby left for Ohio University in 1957 and chose Mechanical Engineering as his major because he had been advised there were good job opportunities.  Throughout his undergraduate program, he found his introductory courses in marketing and philosophy far more interesting than engineering.  Shelby joined the Acacia fraternity, and although it was a social fraternity, it had a strong emphasis on academics. Shelby’s fraternity brother and roommate, Philip Emmert, invited him to join his family for Thanksgiving in 1959.  This is when he met the love of his life, Philip’s sister Suzanne.  When he met her he thought she was a very special person and two months later invited her to a fraternity party.  After dating for two years, they were married on July 15th, 1962, in Marietta, OH.  Shelby graduated with his BSME from Ohio University in December 1961 and accepted a job as a sales representative for Hercules Powder Company.  He and his new bride moved to New Brunswick, NJ, for training. Shelby finished the training program in January 1963, and Hercules sent him and Suzanne to Chicago. He was on the road traveling five days a week, putting a lot of stress on the young marriage. Shelby was transferred to Detroit in early 1965.  This smaller territory meant he was home every night.  Shelby was ecstatic when favored with a daughter, Michelle, in September 1965.  She was the most important person to him, second only to the love of his life, Suzanne.

In 1966 Shelby decided to pursue a Ph.D. in Marketing.  He moved his family to East Lansing, MI, to attend Michigan State University.  He graduated in 1968 and accepted a faculty position at the University of Wisconsin’s Graduate School of Business. He received tenure in 1972 and a full professorship in 1976.  Shelby was Department Chair from 1974 until 1980.  He moved his family to Texas Tech University in 1980 to escape the brutal Wisconsin winters.   He felt that the TTU College of Business had extraordinary promise, and he was committed to the college and university for the next 42 years.  Shelby was the Jerry S. Rawls Chair of Marketing and a P.W. Horn Professor.  He had planned on retiring on August 1st.

Shelby served TTU and the discipline of marketing with distinction.  He is known throughout the world in the marketing field for his ground-breaking work on marketing theory and the philosophy of science. He authored numerous books and more than 200 articles.  He is one of the most cited authors in business and economics.  Shelby was known for his research and writing but never lost his passion for teaching and working with students.  His door was always open to students and colleagues.  Despite all his accomplishments, he remained humble and was quick to give credit to others.

The true love in Shelby’s life was his wife Suzanne and their family.  He was completely devoted to Suzanne, and she was not only his confidant but his constant companion. He was a dedicated father, never missing a band concert, dance recital, or marching competition.  He met his daughter Michelle weekly for lunch for the past 24 years.  It was a highlight in both their weeks.  Shelby was very proud to be a granddad and loved having the grandchildren spend the night.  He rarely missed any of their events and would travel around the state to watch them in basketball and dance competitions.

Shelby’s brothers and nieces were scattered across the states, and he was very good about emailing and calling them to stay in touch.

Shelby was a 41-year Texas Tech football and basketball season ticket holder.  He loved to travel the world, and he and Suzanne were masters at cruising.  If you asked him about a city in Europe or the United States, he most likely would have a restaurant recommendation.  Shelby was in a bowling league for close to 40 years and loved playing cards, be it poker, bridge or frustration with the family.

He was preceded in death by his parents, Donald and Marguerite Hunt; and his brothers, Bill Hunt and Larry Hunt.